The legendary statement attributed to Henry Ford that if he had asked people what they wanted, they would say a faster horse is almost certainly apocryphal. That said, for more than a century, engineers have been working to make our “horses” ever faster no matter what shape they come in. While the speed focus used to be on cars, over the past few decades as more drivers move into utility vehicles and trucks, they too have received the power treatment including the Audi SQ7.

The idea of high-performance SUVs was once as absurd as electric cars outrunning Ferraris and yet both are now very much a thing and quickly becoming one and the same. But fast SUVs are now coming up on their 30th birthday. GMC started it all with the Typhoon by bolting a big turbocharger to its pedestrian 4.3-liter V6 and stuffing it into the compact S15 Jimmy SUV just as it had done the year before with the Syclone pickup. For its time, the 280-hp it sent through an all-wheel drive system was impressive. Today, that’s table stakes. The Typhoon was quick in a straight line, but steering and braking were mediocre at best, and the interior clearly showed its cheap truck heritage.

It wasn’t until Porsche created the Cayenne that the world really began to see the possibilities for performance SUVs that approached the overall capabilities of sports cars. The Audi Q7 shares its basic architecture with the Cayenne, the Lamborghini Urus and the VW Touareg that is no longer sold in the US. The SQ7 isn’t even the most capable performance variant of Audi’s big utility, that would be the RS Q7 which we also don’t get, but we do get the slightly shorter RS Q8.

Adding the S prefix to a Q7 creates a vastly different experience from that old Typhoon. In addition to high performance, luxury wasn’t really a thing in SUVs in 1991. Today, sales of luxury brands like Audi, BMW and Mercedes-Benz are increasingly dominated by SUVs like the Q7. That means you’ll find all of the fancy gadgetry and materials once reserved for models like A8 inside of this 3-row utility vehicle.

Audis have long had a reputation for high-quality materials and fit and finish and the SQ7 doesn’t disappoint. Soft-touch surfaces are everywhere along with metal, wood and carbon. The infotainment is the latest iteration of Audi’s MMI that has done away with the central rotary controller in favor of touchscreens.

Like other Audis of recent years, the SQ7 has a dual screen setup. Media and navigation are on the upper screen while the lower display is for climate control, seats and other settings. Both are smoothly integrated into the dash and console rather than using the standup tablet style setup that is increasingly common. While many find this integration more visually appealing, the navigation display is also further down from the driver’s normal line of sight while driving. However, the SQ7 does include a heads up display that integrates navigation prompts.

One unique aspect of the Audi MMI touchscreen system is the haptic feedback. Cadillac has previously offered haptic feedback on its CUE infotainment system but the screen still responded to taps much like a typical tablet or phone. The Audi system requires you to actually press the screen as if it was a button and provides the tactile feedback in response. The screen doesn’t actually move like an old Blackberry Storm, it’s more like recent Apple
trackpads. It takes a bit of getting used to if you are familiar with other touchscreen devices, but it is less prone to phantom taps and provides that reassuring feedback that it recognizes the request to do something.

Several years ago, Audi began deploying vehicle to infrastructre (V2I) communications in its US market vehicles. The Audi V2I solution uses the built-in LTE connection to get information from local traffic signal management systems about light timing. This is used to provide a signal countdown in the instrument cluster that lets the driver know when the lights will go from red to green. It can also provide a recommended speed to drive to hit green lights. Unfortunately in my area, only a handful of signals actually seem to be included in the system, which significantly limits the usefulness of the system. As usual, your mileage will vary.

The Q7 is currently the largest of Audi’s utility vehicles but it’s not as large as many 3-row competitors. The reality is that this is more of a 5+2 with the third row limited to children or short adults. Most people will probably just want to leave the third row folded for an extra large cargo area. The second and third rows can both be folded or lifted with power switches in the cargo area.

What sets the SQ7 apart from normal Q7s is under the hood. Across the Volkswagen Group, there are relatively families of engines with each available tuned to different levels of performance for different models. In this case, it’s a 4.0-liter, direct injected and twin turbocharged V8 engine. Variants of this engine can be found in Audi, Porsche, Lamborghini and Bentley models.

The Lamborghini Urus gets a 650-hp version of this powerplant. In the SQ7, it’s toned down to a mere 500-hp and 568 lb-ft of torque which is more than ample to push the nearly 5,300-lb utility to 60 mph in about 4.3 seconds. When you press the start button in the SQ7, it also produces a lovely growl from the four exhaust tips. Like all performance oriented Audi models today, the SQ7 has Quattro all-wheel drive to spread the torque around although with the 285/40R21 tires are clearly not intended for any off-road use beyond the occasional strip of gravel. The SQ7 can tow up to 7,700-lbs.

There’s a five-link independent suspension system at each axle and adaptive air springs are standard on the SQ7. Despite its ample heft, the SQ7 feels surprisingly nimble on the road. It’s no Miata or TT but it is responsive and the suspension does an impressive job of balancing allowing the wheels to follow the road contours while still keeping the body motion under control. In a straight line, that V8 is responsive enough for anything 99.9% of drivers will ever need, although it clearly won’t win any drag races with it’s Italian cousin or a Jeep Grand Cherokee Trackhawk.

As a premium Audi, the SQ7 comes with a full suite of driver assistance features such as lane centering, blindspot information and adaptive cruise control. Since it also shares elements with vehicles like the A8, the current version of the SQ7 and other Audis were designed with the intention of including the company’s traffic jam pilot system. This was meant to be a hands-free, eyes-free partially automated system for use in low-speed traffic on highways and the A8 originally included a Valeo Scala lidar sensor. Several of the current Audis including the SQ7 include two elements embedded in the grille that look like that lidar. One was meant to be the lidar while the other is the forward radar sensor behind a similar cover to provide symmetry. The lidar isn’t being installed on the SQ7 these days while the radar remains. Nonetheless, a dummy cover is in the same location as the lidar to provide visual symmetry.

The 2022 SQ7 in the base premium plus trim starts at $86,500. The Matador Red Prestige with with $5,000 Bang & Olufsen audio and $1,650 laser headlights comes out to $99,440. Those that are looking to maximize the handling of the SQ7 can also add a $5,900 sport package with active roll control and a Quattro Sport rear differential although truthfully, anyone driving a big SUV in a way that takes advantage of those bits should probably be driving something other than a big SUV, or perhaps get the RS Q8. Then again, if you have $100K to drop on an SQ7, what’s a few grand more? Either way, you’ll probably have lots of fun.

How Much Does Epoxy Garage Floor Cost? A Budgeting Guide

Tue Aug 24 , 2021
Photo: istockphoto.com Typical Range: $1,447 to $3,006 National Average: $2,227 If you’re tired of the plain concrete flooring in your garage, you may be interested in long-lasting epoxy flooring. Epoxy is a rugged and durable finish that will transform dull garage flooring into a gleaming surface. According to HomeAdvisor, epoxy […] 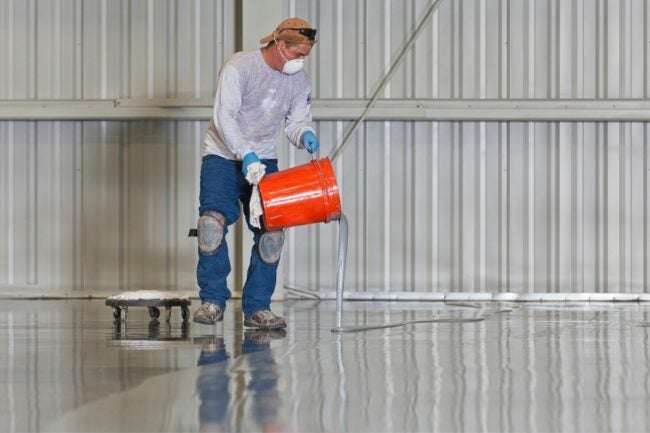